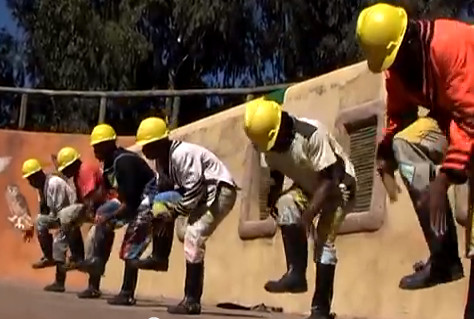 The Wellington boot takes its name from the first Duke of Wellington (1769 – 1852). He was an English aristocrat who instructed his shoemaker to modify the popular eighteenth century Hessian boot. Originally made from calfskin leather, the boot was treated with wax to make it softer, more comfortable and more water resistant. Remarkably versatile and hardwearing, it was well suited for the battlefield and served equally well as men’s evening wear.

By the mid to late eighteenth century, Wellingtons were being made from a durable material derived from natural rubber. In South Africa they became known as gumboots and were standard issue footwear worn by miners. Gumboots are a key component of the ever-popular gumboot dance.

The origins of gumboot dancing

Gumboot dancing evolved from traditional African dancing and became firmly entrenched in urban South African working class culture. It started with black miners who came from far off places including Malawi, Zambia, Swaziland, Botswana, Lesotho and various regions of South Africa, to work in the gold mines of Johannesburg.

They brought with them hopes of better prospects, rhythm, and song and dance. Working deep underground in dark and damp tunnels, they faced oppression and hardship. Miners were prohibited from speaking to one another while working. If they did so, they were punished.

The fact that many ethnic and language groups worked side by side and that they were not allowed to communicate verbally, compelled them to develop a non-verbal language through shared rhythm and music. They used their gumboots and bodies as instruments of protest.

Through a series of boot slaps, clapping and stomping, miners freely expressed themselves about poor working conditions and low wages. Sometimes they would openly mock their oppressors who were oblivious to the art form’s underlying meaning.

Initially mine bosses banned gumboot dancing but they themselves were soon seduced by it, and came to appreciate and encourage it. Some mines staged public performances even and entered their gumboot dance troupes in competitions, all the while happily ignorant of the codified protestations.

Gumboot dancing is still performed in post apartheid South Africa but more as a means of entertainment. Since its early emergence as an expressive from of protest it has spread to various parts of the world where it is performed predominantly as a uniquely entertaining and singularly distinctive dance form.