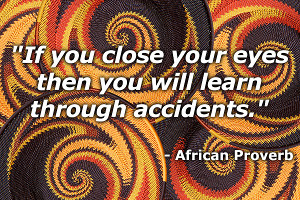 A proverb is a popular, repeated, often metaphorical saying that expresses a commonplace and universal truth. Regardless of where the saying originates or the language used, the international currency of proverbs is so far reaching nowadays that it transcends cultural differences, values and belief systems. In fact, proverbs serve to remind us of how fundamentally similar we all really are.

Sometimes, two proverbs don’t share the same words but share the same meaning. Take for instance the biblical proverb, “An eye for an eye, a tooth for a tooth” and the East African, “A goat’s hide buys a goat’s hide, a gourd a gourd”.

Whether or not these particular sayings share an underlying wisdom is another matter altogether though. As the famous spiritual and political leader, Gandhi is thought to have said, “An eye for an eye makes the whole world blind”.

Wherever they originate, proverbs are a significant part of oral tradition passed down from generation to generation in various forms. Throughout the African continent you’ll find a proud history of oral storytelling punctuated regularly with proverbs, some of which have made there way into everyday language in other parts of the world.

For example, the popular saying, “It takes a village to raise a child” has become so ingrained in popular culture around the globe it has practically become a cliché. Some people argue the saying comes from the Bible because it embodies a worldview relating to unity and self-sacrifice found in various passages. However, the saying itself is probably more likely to originate from the Igbo or Yoruba people of Nigeria where, as in many other parts of Africa, raising a child requires the participation of an entire community.

African proverbs in a modern world

Whatever the frame of reference, proverbs have been a source of guidance for African communities in times of uncertainty and remain an inherent part of various societies. According to the Ashanti people of Ghana, “We speak to a wise man in proverbs and not in plain language”. For many people in various African countries, proverbs are wisdom and wisdom is life.

Nowadays, there’s a growing sense in some cultures that proverbs are the fading residue of old traditions and philosophies. However, they are by nature an expression of human observation on everyday occurrences and timeless matters concerning nature, family, birth, life, and death. Increasingly popular sayings of today could well become the cross-cultural universal wisdoms of tomorrow. After all, according to another African proverb, “A wise man who knows proverbs can reconcile all difficulties”.