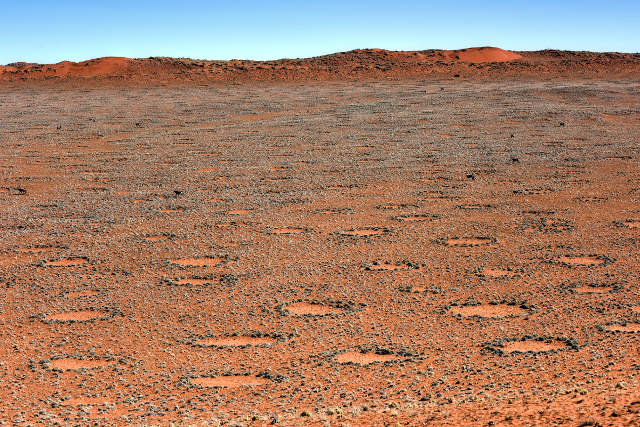 Usually, the term “fairy rings” is associated with fae myth and lore. For centuries, the sudden overnight appearance of a ring or arc of wild mushrooms was said to be the work of otherworldly beings, portals to other worlds or the remnants of fairies dancing around in a continuous circle. Africa has its own fairy rings in the Namib Desert, a coastal desert of Southern Africa. While, the desert rings are not made of mushrooms and they have no correlation to little winged people they are no less mysterious.

What are Namib fairy rings?

Namib desert fairy rings are giant bare circles on arid land approximately 10 to 65 feet in diameter with the ring often framed in a fringe of grass. As opposed to one circle though, they are spread out en masse, like super-sized chicken pox, across huge tracts of land. They’re perfectly round and perfectly spaced as though engineered that way. Why they are there and how they formed has mystified scientists for decades.

What the local Himba people believe?

The Himba people, famous for the red-orange tinge of their skin and hair, believe the rings to be created by Makuru, a supreme being or god. Other accounts suggest everything from an underground dragon with a fiery breath that destroys vegetation above ground, UFOs and radioactive soil, to termites, fungi and self-organisation linked to water scarcity. Still unresolved, the debate continues with no clear front-runner.

The appearing and disappearing Namib Desert fairy rings continue to enthrall visitors and baffle scientists. Some scientists suggest that the only way to solve the mystery would be to artificially create and close up the circles. This would require an intense manipulation of water levels, soil quality, termite populations, and perhaps even provoking a dragon.

One cannot help but wonder if the implementation of such an experiment is possible across kilometers of arid land for a bizarre phenomenon that has been in existence for who knows how long? For now, the only certainty about this rare phenomenon is that the fairy rings remain a mystery.