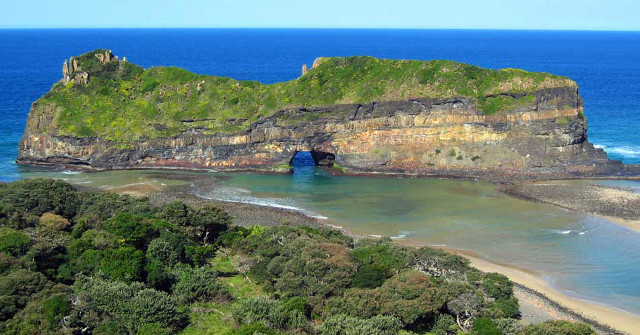 Since the beginning of civilization, extraordinary stories have been told, passed down from generation to generation. Some stories are based on tradition or myth. Others are semi-true legends. At some point they all become folktale, embellished in part as they are gifted from one storyteller to another. Africa, widely considered to be the birthplace of man, is overflowing with such stories, one of which includes the legend of an unusual hole in a wall just off the Eastern Cape ‘Wild Coast’ of South Africa.

South Africa’s Hole in the Wall

Hole in the Wall is in fact a small holiday town, which takes its name from an unusual arched rocky formation just off the shoreline. The formation is one of South Africa’s impressive landmarks and the source of numerous legends. One such legend belongs to the local Bomvana, a clan of the Xhosa people who named the formation esiKhaleni or ‘place of sound’. According to this legend, the Mapako River, which runs through the hole in the wall once formed a landlocked lagoon. A cliff blocked the river’s access to the sea.

One day, a beautiful maiden who lived in a village near the lagoon was spotted by one of the sea people (deities resembling humans but with flipper-like hands and feet). Intoxicated by her beauty he persuaded her to be with him. When the maiden’s father heard of the dalliance he was at once furious and concerned. He and his clan considered the sea people cunning and dangerous. Her forbade her to have anything to do with her lover or to leave the village.

As in all romantic legends, the maiden and her lover were determined to be together. So, at high tide one night, the sea people gathered at the cliff and the maiden snuck away from the village to meet them. With the help of an enormous sea serpent (fish) they rammed a hold in the wall. It is said that the sea lashed against the hole until the barrier between sea and river mouth was lost. The maiden joined her lover and was never seen again.

Some nights, when the tide is high, if you listen carefully you can hear the sea people. Lured by the rocky archway people have tried to navigate the hole by swimming or in boats. Some have managed to climb to the top. Many have succumbed to injury or death. Perhaps, as advised by the locals, The Hole in The Wall is best appreciated from the shore away from the treacherous lashings of the sea and the sea people.