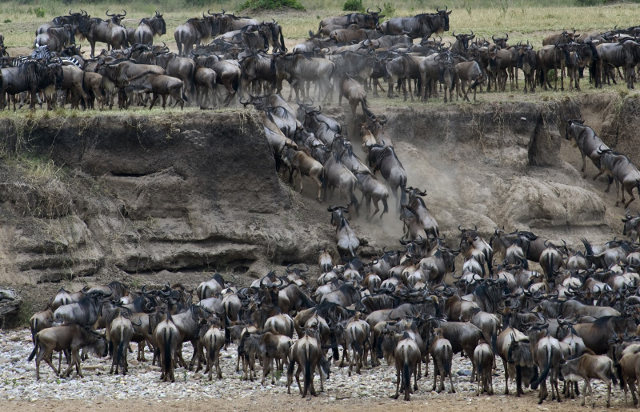 Africa is arguably the most evocative continent on earth. It’s brimming with natural beauty, ancient customs and traditions, culture and famously friendly people. Find out more about the longest nose in the world, Africa’s largest freshwater lake, why people come form all over the world to witness the annual migration, and read about the little-known red-skinned ladies.

The African elephant – longest nose in the world

Weighing up to seven tons in adulthood, the African elephant is the largest land animal in the world. One of its most conspicuous features is its agile trunk. It looks like an incredibly elongated nose and serves as an arm. The trunk contains tens of thousands of muscles used for smell, touch, clutching at food and making trumpeting noises and other sounds.

More recent studies suggest that elephants can communicate over long distances by producing a kind of sub-sonic rumble that can travel along the ground faster than sound through air. The elephant also uses its trunk like a snorkel, to breathe in deep water.

The Serengeti is a vast area of short grassland planes spanning the African countries of Tanzania and Kenya. It is synonymous with wildebeest and zebra congregating in their hundreds of thousands each year to begin the largest overland migration to the rains in the north.

Usually, by May each year the rainy season ends, the African sun beats down onto the earth, and the grass is depleted, unable to sustain the wildlife dependent on it. The migration begins with groups gathering, grunts and cries, and then the landscape becomes a giant quilt of thundering hooves.

The women of the ancient Himba tribe of northwestern Namibia are famous for the red-orange tinge of their skin and hair. They use otize paste, which they make from butter, fat and red ochre and apply it to their hair and skin. This custom has many functions. It separates the men from the women, keeps the skin clean and moist, and protects them from the sun. Some researches suggest it has symbolic meaning too as it unites the red colour of the earth to blood, which is the symbol of life.

While it’s true that a colonial and apartheid past still impacts the lives of many African people, the continent has an evocative rhythm and heartbeat. You really don’t have to delve deep to discover how incredible an African experience can be.