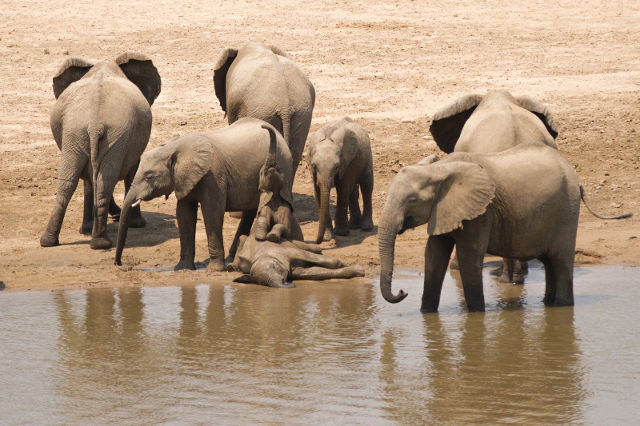 Our planet is populated with magnificent creatures from microscopic organisms to colossal land, air and water dwellers. At the top of the colossus scale, coming in at approximately 180 tonnes and 30 metres (100 feet) in length, the Blue whale is the largest animal on earth and the heaviest. Its tongue alone is said to weigh as much as an elephant. Here are some African animals that are also hold some colossal records:

On the subject of elephants, Africa has its own impressive list of large creatures including the African elephant, the planet’s biggest and heaviest terrestrial animal. Much larger than its Asian cousin, shoulder to toe the African elephant stands more than 3 metres (10 feet) and weighs up to 7 tons.

From trunks to beaks. At a height of approximately 2 to 2.7 metres (7 to 9 feet) and weighing 100 to 160 kilograms, the ostrich is the largest bird in the world. Although unable to fly, what it lacks in levitation it makes up for in speed. The ostrich also has the distinction of having the largest eyes of any land animal.

Since the time of the dinosaur, Earth has witnessed countless gargantuan-scaled beasts including the crocodile. Thought to be around 200 million years old it outlived its fellow dinosaurs and invokes both fear and fascination in humans.

The saltwater crocodile is the largest species and is found in various parts of the world including Africa. The longest captive saltwater croc was a chap called ‘Lolong’ from the Philippines. From snout to tail he measured 6.17 metres (20 feet and 3 inches) and weighed 1075 kilograms.

Not to be outdone, the Nile crocodile is the second largest croc species in the world. Legendary man-eating ‘Gustave’ of the African country of Burundi is estimated to be about 6 metres (20 feet long) and still growing. He has never been captured.

With an elongated neck of 2 metres (6 feet) or more accounting for almost half its vertical height, the giraffe is the tallest land animal. At an astonishing 18 to 20 inches (45 to 50 centimetres) its prehensile (capable of grasping) tongue is among the longest in the world.

Of the world’s largest freshwater fish, the Nile perch isn’t the largest in the world. Still, at a length of 6 feet and weighing up to 230 kilograms it certainly features in the top 10. Found in lakes and rivers not just in the Nile Delta but also in the Congo, Ethiopia and parts of the Mediterranean it could be argued that it isn’t strictly African although it is commonly referred to as the African Nile perch.

Occurring practically everywhere except for Antarctica beetles are the most common type of insect. Based on weight and bulk, the Goliath beetle is a worthy challenger for the largest insect on Earth title. There are others that are slightly longer but these contenders are lighter and pack less of a punch in terms of strength. This heavyweight can lift more than 800 times its own weight.

While Africa is no slouch in the large specimen eight-legged department it doesn’t feature on any world’s largest top 10 lists. However, the Southern African Six-eyed sand spider features on practically every most dangerous Arachnid list, dangerous to other animals that is.