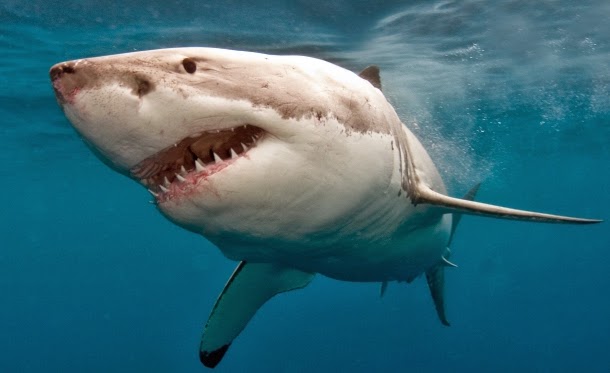 Myth: Humans are top of the menu

Even before Steven Spielberg and his giant rubber shark chomped their way through barrels, boats, boots and crowds of people, sharks have received a bad rap. In spite of the various shadowy images doing the rounds on social media, sharks don’t, as a habit, deliberately seek out human flesh for food. When an attack occurs, it’s more likely the result of an inquisitive bite – a shark’s way of determining what it’s biting into. Usually, it will have mistaken a human for its actual prey, a seal for instance.

Myth: All sharks are dangerous

There are hundreds of shark species, but only a handful are considered dangerous. These so-called baddies include the great white, tiger and bull sharks that are the culprits in most human attacks. If size were anything to go by the 40-foot length or more Whale shark it would be enough to have any bathers scrambling over one another to get out of the water. But this gentle giant, while carnivorous, is a migratory feeder that lives mainly off plankton. Hardly a human guzzling monster, it’s even been known to allow divers to hitch a ride on its dorsal fin.

It’s a little humdrum when any species is assumed unintelligent its brain is likened to that of a nut of some kind. Some sharks, such as the Tiger shark, might seem a little dense, particularly when it meanders through the water munching everything in its path. However, it’s no accident that sharks have survived and evolved over hundreds of millions of years. The reality is that a shark’s brain is a fairly complex organ. They are acutely aware of their environment, exhibit surprisingly complex social behaviour and have a phenomenal sense of smell.

Fact: Humans are more of a threat to sharks

The law protects certain species (including great whites and whale sharks) even though they’re not currently threatened with extinction. Yet they fetch a tidy sum and are illegally hunted, slaughtered and traded for various uses. The meat is sold for food, the fins to make shark fin soup, the skin to manufacture bags, and the oil to make various fish oil products. Sharks play a critical role in helping to maintain a healthy balance in marine ecosystems. The real apex predators, therefore, are clearly human.