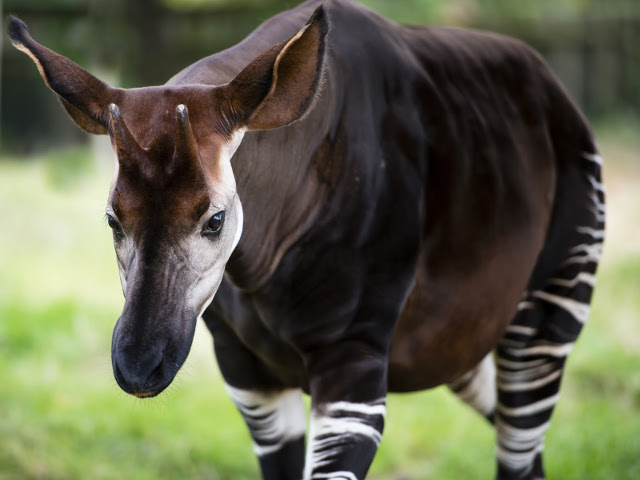 Practically every country on the African continent is home to a credible list of places to see some of the world’s most spectacular wildlife. There’s little wonder then that every ardent traveller dreams of going on an African safari to see the everything from lions, elephants and hippo to meerkats and dung beetles. What most people don’t know is that deep in central Africa in the Ituri rainforests of the Democratic Republic of the Congo lives an illusory, little-known creature called the Okapi.

The Okapi – a legendary African animal

One of the earliest Western reports of this mythical African unicorn reference a leaf-eating African donkey spotted in the late 19th century. From afar it resembled a small horse or donkey with zebra stripes on its forequarters, hindquarters and rump.

After some scientific tussling as to whether it was in fact a donkey, a forest eland or a species of zebra, it was established that this beautiful creature is related to none of the aforementioned. While the Okapi shares the unique markings and features of a number of different African animals it is in fact most closely related to the giraffe.

Characteristics of a forest giraffe

Like the giraffe, the Okapi has an unusually long, dark prehensile tongue with which it is easily able to strip foliage from tree branches. The tongue also functions as a nifty grooming tool, which helps to keep the okapi’s silky shorthaired, reddish-brown and black coat – which acts as clever camouflage – in top condition.

Okapi’s also have small giraffe horn-like head protrusions. Made from ossified cartilage, theses ossicones are covered by skin and fur. While ossicones are not quite the long alicorn (unicorn horn) of Middle Ages legend they are a distinguishing feature of the male okapi.

The Secret Life of the Okapi

Another giraffid characteristic is the Okapi’s decidedly large, upright ears. These allow for exceptional hearing which enables them to hear even the slightest sounds. Thus alerted to danger, they are able to dart away to the hidden safety of the lush rain forest undergrowth.

Even without the threat of danger, the Okapi is a reticent creature. They tend to live solitary lives, do not mate for life and they don’t live in family groups except for mothers with offspring. Although the Okapi generally roams alone, it has scent glands on the bottom of its feet to keep track of other Okapi and to mark its territory.

Revered in the Congo, the shy Okapi and is the country’s national symbol. Sadly, civil conflict, poaching, illegal mining and poverty have led to habitat degradation and hunting for Okapi skin and meat. Although the giraffe’s only living relative is not classified as endangered, this beautiful creature is threatened. Its survival is dependant on conservation efforts including the protection of its precious rain forest sanctuary.