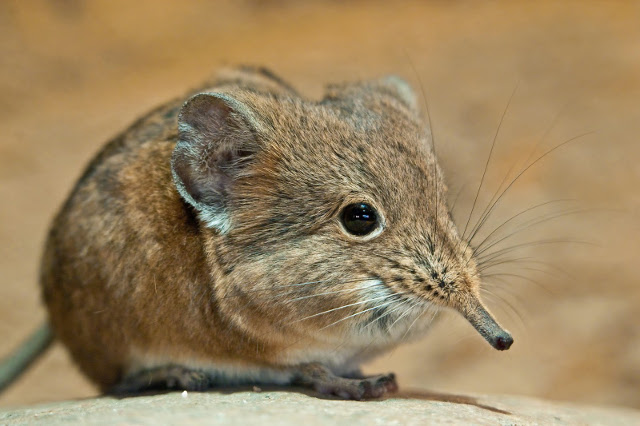 Shrews look like long-nosed moles or mice but, in spite of their external appearance, these mammalian creatures are not rodents. There are numerous species and while seemingly similar, you might be surprised to learn that the elephant shrew is closely related, by virtue of its DNA, to elephants. This cute create is native to more than six African countries, including South Africa.

It could be argued that the sengi’s tiny, bendy nose (and that of shrews) resembles the trunk of an elephant. But this would be a bit of a stretch. The elephant uses its trunk as a hand to prepare food, to drink and wash, and to make its famous trumpeting call. The sengi does not use its long and spindly ‘trunk’ or nose in quite the same way.

For starters, the sengi’s nose is not as flexible and is used primarily to snuffle about for small invertebrate snacks, such as ants and uses its tongue to snatch at its crawly food. There’s also the obvious size difference.

Sengis spend a great deal of time gadding about and sprinting away from larger creatures under whose feet they might otherwise be trampled. They never build shelters for protection but they’re able to evade all manner of tricky situations including snakes and birds of prey that might otherwise gobble them up.

In spite of their generally minutiae size (albeit the ‘giant’ variety grows to the size of a squirrel) sengis are almost always on the go and are clever engineers. They never rest for longer than two to three minutes at a time and spend much of the day creating their own speedway networks in the form of tiny trails. Using their legs and sometimes their foreheads too, they carve out tracks and brush away debris, twigs and leaves.

Without these networks the sengi probably wouldn’t survive their two to four year life span. That said, the biggest threat to their survival is not their size or being trampled or devoured. The sengi is most vulnerable to fragmentation of their forest or open plain habitats, particularly the kind of fragmentation caused by humans. When separated from necessary resources, finding a mate is more difficult and this threatens population growth. Sengis have been known to adapt their physiology to suit their environment but this is no match for the predominantly human-induced habitat fragmentation.