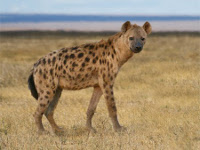 Hyenas are not the drooling, mangy scavengers depicted in the Lion King. While they aren’t the most attractive animals in Africa, not by a long shot, they certainly don’t deserve their reputation as lazy, dull-witted thieves who survive on the scraps of other predators. Yes, they’re opportunistic and will happily crunch leftovers including teeth, bones, and even hooves. But make no mistake, they’re intelligent, skillful hunters that can manipulate and take down wild animals much larger than themselves with their speed and vice-like jaws.

Spotted hyenas are one of three types. The other two are called brown and striped for obvious reasons. Our spotty friends are the largest and known for their sharp eyesight, astute hearing and a cackling call, which sounds like a loopy human laugh. They live together in large groups of 80 or more called a clan, ruled by a dominant female. The ladies, much larger than the gents, squabble among themselves for dominance, and snarl and snap at the men folk to keep them in line.

There is a commonly held view that hyena are a type of wild dog. However, in spite of their patchy, disheveled appearance and odd bear-like gait they are in fact, more like cats. They are also diligent parents and their so-called laugh is only one element of an impressive vocal range.

A hyena clan is surprisingly social and will split into smaller groups but not for long. They always reintegrate. When this happens there’s an unusually civilised one-on-one greeting ritual between all the clan members regardless of status, age or sex. That said, they are ultimately hierarchical. Hyena decorum dictates that the submissive hyena will always initiate the greeting.

Overpopulation in Africa is an increasing problem on many levels. For hyenas, this means increasing contact with humans. As a result, they’ve become a bit of a scapegoat, and while not entirely innocent, are accused of significantly more livestock and human deaths than are justified. In some parts of Africa, they are indiscriminately hunted as vermin.

The spotted hyena is not currently on the endangered list although conservation authorities are becoming concerned about the decline in numbers as a result of hunting, trapping and poisoning. As hunters, hyenas prevent overgrazing by helping to maintain herd numbers. As scavengers, they devour large quantities of dead matter. Nothing is wasted; they’ll eat almost anything. In fact, certain tribes, like the Masai, leave their dead out for hyenas to dispose of.

Spotted hyenas are one of Africa’s most notable predators, perhaps even more so than even the king of the jungle, the lion, in that they will dine on a rougher menu. Their social system and intriguing behaviours are unique. Hyenas are an incredibly important part of Africa’s wildlife population and they deserve as much respect and protection as any other member of the animal kingdom.