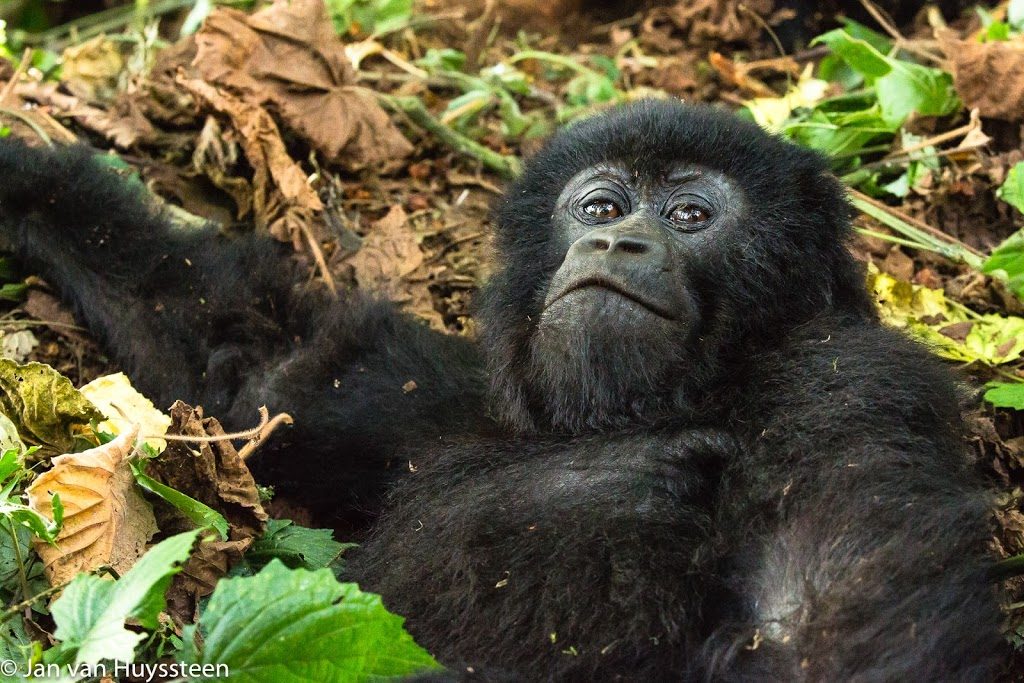 The word “gorilla” dates back to ancient times when Hanno the Navigator first clapped eyes on a savage people on the West African Coast: a group of what he thought to be incredibly hairy human females. He called them Gorillae.

Nowadays, scientists are uncertain as to whether the species he spotted were in fact gorilla or another kind of ape. Nonetheless, the word became a species name and literally means “tribe of hairy women”.

One of our closest living relatives

The term “African Ape” refers to gorillas, chimpanzees and bonobos, all of which diverged from a common hominidae ancestor. In fact, at least 95% of gorilla DNA is shared with humans, which makes them one of our closest living relatives. Much like humans, gorillas live in complex social communities or groups. They use tools to go about their daily business, such as sticks to forage for food or to test the depth of muddy water and swampy areas, and, in so doing, demonstrate a very human-like capacity for problem solving and dexterity.

As the largest of the great apes, a mature male Gorilla can reach six feet, weigh up to 230 kilograms, and have an arm length of eight feet. Their arms are longer than their legs to carry the weight of their enormous torsos and heads. Males develop a saddle-shaped patch of silvery grey on their backs when they reach sexual maturity hence the term “silverback”.

A typical gorilla family includes a dominant silverback gorilla with multiple females, juvenile gorillas and infants. It is his job to keep the group together and provide protection, sometimes with the support of other silver backs or younger black back males. As leader, he makes the important decisions on behalf of the group, such as when to move and where to move. He mediates conflict, protects infant gorillas from infanticide and nobly defends the troop against predators.

Gorillas generally live in stable social groups and live within relatively small areas of land. In the wild they live to the grand age of 35. Sometimes groups co-exist peacefully in converging areas. When young male gorillas reach the age of 8 to 11 they usually move away and join another group, or start a new family of their own.

Gorillas, like humans, are social creatures. They engage in social grooming, which takes the form of rifling through one another’s hair with fingers or teeth. More than an exercise in hygiene or looking good, grooming is, in fact, an act of reinforcing social bonds.

While the majority of a gorilla’s menu consists of berries, leaves, shoots, stems fruit, and flowers, gorillas aren’t entirely herbivorous. Sometimes they chomp on small animal proteins such as grubs, caterpillars, snails, termites and ants. While they enjoy feasting on food, up to 18 kilograms a day, their pot bellies are not a side effect of too much food, but rather the result of enlarged intestines, which aid digestion.

A contact call, also known as a belch vocalisation, because it was originally thought to be gorillas belching, is considered polite and respectful gorilla etiquette. Human observers are encouraged to use the belch vocalisation to indicate non-aggression. This together with a low stance, arms folded, eyes away, but glancing out of the corners shows that you’re non-threatening. It let’s gorillas know that you’re coming so that they aren’t surprised by your presence.

Scientists have shown that the King Kong-esque movie portrayals of the largest of the apes as a ferocious beast are wholly untrue. In fact, the famous American zoologist, anthropologist and primatologist, Dian Fossey, who first undertook and documented extensive in-depth studies of mountain gorillas in their natural habitat, discovered that they are incredibly gentle and, surprisingly shy. She said, “It was their individuality combined with the shyness of their behaviour that remained the most captivating impression of this (her) first encounter with the greatest of the great apes”.

Screaming, hooting, growling, roaring, howling, chuckling, chest pounding and other sounds and gestures can seem loud and intimidating if you’re not a gorilla. The screaming charge, with which most people are familiar, is in fact a big, hairy, yet vulnerable creature communicating anger and fear. It’s a tactic to scare away humans, their only predators. Gorillas are after all an endangered species – mainly from loss of habitat and hunting.

While many scientists resist “anthropomorphism” – projecting human emotions on to animals – other scientists have increasingly documented gorillas’ deeply touching ability to show emotions such as grief. Gorillas demonstrate compassion for other primates, even humans. As Dian Fossey said, “Gorillas are almost altruistic in nature. There’s very little if any ‘me-itis’… I feel more comfortable with gorillas than people. I can anticipate what a gorilla’s going to do, and they’re purely motivated. The more you learn about the dignity of the gorilla, the more you want to avoid people”.