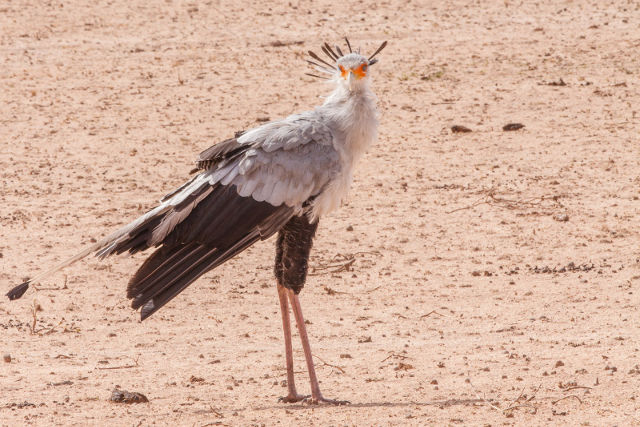 When most of us hear the word “raptor” we think of velociraptors or eagles and falcons. Unless you’re an avid twitcher, it’s unlikely that you’ll have heard of Africa’s Secretarybird or Secretary Bird. This unusually large bird of prey is a captivating character with spectacular features. While it shares some of the anatomical characteristics of its noble and distant raptor cousins, including strong feet, sharp talons, a curved beak, and exceptional vision, it rightfully belongs in a family of its own, Sagittaridae, and here’s why.

For starters, the secretary bird has the longest raptor legs in the world and walks an astonishing 20 to 30 kilometres a day. That’s the equivalent of walking a large sports field 300 times in one day. To look at it’s spindly crane-like legs you wouldn’t think it powerful and agile but contrary to appearance, its gams are deceptively strong. While the body is covered in grey, white and black feathers, the legs are feathered in black. This gives it the comical appearance of wearing breeches or stockings. In contrast to its general white, grey and black colouring, the Secretary Bird also has unusual red, orange and yellow skin tones around its watchful eyes and in front of its beak.

In flight, the species can be distinguished from all other birds by the two long tail feathers that extend beyond its feet like arrows in a quiver. It also looks more like a stork than a raptor when it flies. Taking off is a seemingly arduous and often prolonged run, but once aloft the Secretary Bird is a prolific flyer.

Endemic to the open grasslands of sub-Saharan Africa, the Secretary Bird generally strides about with a purposeful loping gait looking for dinner or bits of wood or grass to remodel the nest in preparation for the coming brood. It also uses its legs to flush out or stomp on prey. Once sufficiently stunned or unconscious the prey is consumed and depending on its size, swallowed whole.

In fact, it could be said that a Secretary Bird’s approach to dining is a case of, if it can be stomped into submission it can be eaten. Even snakes can be subdued with a powerful kick if not first snatched up in the bird’s beak.

A diurnal (by day) and mainly terrestrial hunter, the Secretary Bird stalks through its habitat looking for lively meals before returning to the roost at night. The nest is eyrie-like and often situated in the fork of an Acacia tree. Instead of building a new nest every year, the Secretary Bird is a thrifty homemaker, and simply remodels the existing lodgings by adding fresh materials.

Mom and Dad share parenting responsibilities including feeding their chicks regurgitated and liquefied insects which they store in their crops. When old enough to move from a liquid to a solid diet, chicks are weaned onto bits of reptile and small mammals.

It is generally believed that the species are monogamous and stay faithful to their nest site. That said, pairs are not often seen together but stay in contact by hooting.

What’s with the name?

Protruding from its head is a distinctive quill-like or fascinator-type plumage. Some say it is this plumage that accounts for its name. In Victorian times, it wasn’t uncommon for clerks or secretaries to store or tuck quill pens behind their ears. More likely, the name comes from the word Saqr-et-tair In the Arabic language which means “hunter bird”.

Regardless, these unusual hunting birds are vulnerable and their populations are declining. In some places the Secretary Bird has disappeared entirely. This is largely due to habitat loss and degradation although efforts are underway to better understand and sustain not just the Secretary Bird but raptors in general.