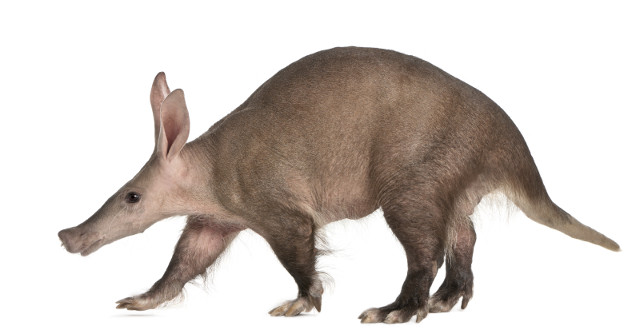 Africa is every kind of special when it comes to wildlife. With more species of mammal than North and South America combined it’s no wonder that travellers trek to the African continent on safari to spot the Big 5 and to see an array of other wildly intriguing mammalian and non-mammalian species.

Often overlooked but no less intriguing, the strange looking aardvark is found in Sub Saharan Africa. Directly translated from the Afrikaans language, aardvark means “earth pig”. Interestingly, while it shares a medley of features with animals including an elongated pig-like snout, rabbit-like tubular ears, and a cone-shaped tail similar to a kangaroo, it bears no genetic relation to any of them. In fact, there is no animal like it: It is the only animal in its bizarre, one-of-a-kind order.

Nocturnal for the most part, aardvarks generally spend their days curled up in cool underground networks. Not adverse to hard labour they dig their burrow homes in soft clay or soil using their powerful machine-speed, spade-like paws. Long thick nails, aid the digging process, so much so that the aardvark can dig feet in seconds. Surprisingly, in spite of being a speedy digger it moves relatively slowly and uses keen hearing and strong sense of smell to guard against predators such as humans, lions, leopards and python snakes.

In addition to being useful for home improvements, the aardvark’s powerful limbs act as nimble cutlery. Leaving their burrows at night to forage for food, the aardvark sways its snout from side to side to pick up termite scent.

Digging through the hard outer shell of a newly discovered termite mound it finds and feasts on its favourite crawly snack within. Using its protractile, sticky ribbon tongue (up to 30 centimetres long) it grabs and gobbles up its dinner. In fact, this earthly hog can consume up to 50 000 termites or ants in one sitting. As far as table manners go (or the lack thereof), an aardvark will sometimes simply press its snout against the opening of a mound and suck up the evening’s meal.

Having an unusually thick skin means that the aardvark never gets bitten. It also has more turbinate bones in its nasal cavity than any other mammal, which allows it to control airflow with military precision. In other words, it can close its nostrils while digging and dining without inhaling dust or suffering invasion from creepy crawlies.

No wonder the aardvark is admired in African folklore for its intrepid search of food and its fearless hunting down of termites and the mighty soldier ant. In fact, not just admired in folklore, the aardvark lends its name to a long-nosed supersonic fighter-bomber known for its nocturnal missions and low-level weapons that can penetrate deep into the ground.