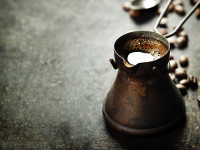 Travel writer Dave Barry said, “It is inhumane, in my opinion, to force people who have a genuine medical need for coffee to wait in line behind people who apparently view it as some kind of recreational activity”. Billions would agree. After all, second to water, coffee is the most consumed beverage in the world, beating out wine, Coca Cola, beer, orange juice, and tea. It’s also the most traded commodity on the planet.

How well do you know your coffee history trivia? Test your ability to separate the beans from the granules with these surprising did you know coffee facts.

Historians suggest that coffee imbibing first took place in Ethiopia. According to legend, a ninth-century goat herder named Kaldi was kept up all night by his goats bleating and dancing about the place after they consumed red coffee berries.

Shortly thereafter, some local monks tried the berries and discovered that they were able to pray for longer. The use of coffee berries spread to other monasteries and energised more monks. Coffee began its spread from Africa throughout the world but it wasn’t until the thirteenth century that people began to roast coffee beans, signalling the first step in the coffee making process, as we know it today.

2.Coffee was originally chewed not sipped

Initially coffee berries were ground, mixed with animal fat and fashioned into bite-sized edible balls. These snacks were chewed and ingested for nutrition and energy during hunts, while farming and on long journeys.

3.Dying for a cup of coffee

Coffee has been banned at various turns throughout history for everything from being satanic to inspiring radical thinking. One such ban by Italian clergyman in the sixteenth-century was overturned by Pope Clement VII because he couldn’t do without his beloved coffee. He even had it baptised.

Apparently, Ottoman leader Murad IV created the first known official punishments for coffee transgression in the 1620s. These included beatings and being hurled into the sea.

In the mid 1700s, the Swedish government declared not just coffee illegal but cups and saucers too.

4.Beer not coffee with breakfast

A couple of decades later, Frederick the Great of Prussia became increasingly concerned about the effects of coffee. It is said that he believed that it interfered with his soldiers’ dependability and with the country’s beer consumption. Issuing a manifesto declaring the superiority of beer over wine, he argued that alcohol would replace caffeine at the breakfast table.

But you can’t keep a man from his coffee and the illegal trade in coffee flourished. So the wily king ordered a special task force to identify and summarily deal with coffee smugglers. The task force was allegedly known as the Kaffee Schnuffler.

Beethoven is best known for his nine symphonies, but not as well known for his peculiar coffee preparation habits. Unable to begin his day without enjoying a cup of coffee (nothing peculiar about that) he would count his coffee beans, insisting on 60 per cup. This is still not all that peculiar for those in the know, as 60 beans is a mere 10 beans more than the average cup contains.

However, he would simply grind the beans up and pour boiling water over them. Thus, in comparison to modern coffee, which goes through various processes, the caffeine quantity in Beethoven’s cup would have been sufficient to have your heart detonate in your chest.

Interestingly, while resembling a bean, coffee ‘beans’ are actually berry pits or seeds. The obvious questions is so what? Does it make a difference if we refer to it as a bean or a seed? Surely coffee is coffee no matter how we label the bean or seed from whence it comes?

Actually, it does make a difference. You may be surprised to discover how different coffee can taste when it is light roasted. In dark roasted coffee the main flavour is the roast. Light roasted coffee yields more delicate, floral and fruity notes. But the best part is this: Regardless of your preference for light, medium or dark roasted coffee you can happily consume your java any way you like without being hunted by coffee Schnufflers or being thrown into the sea.