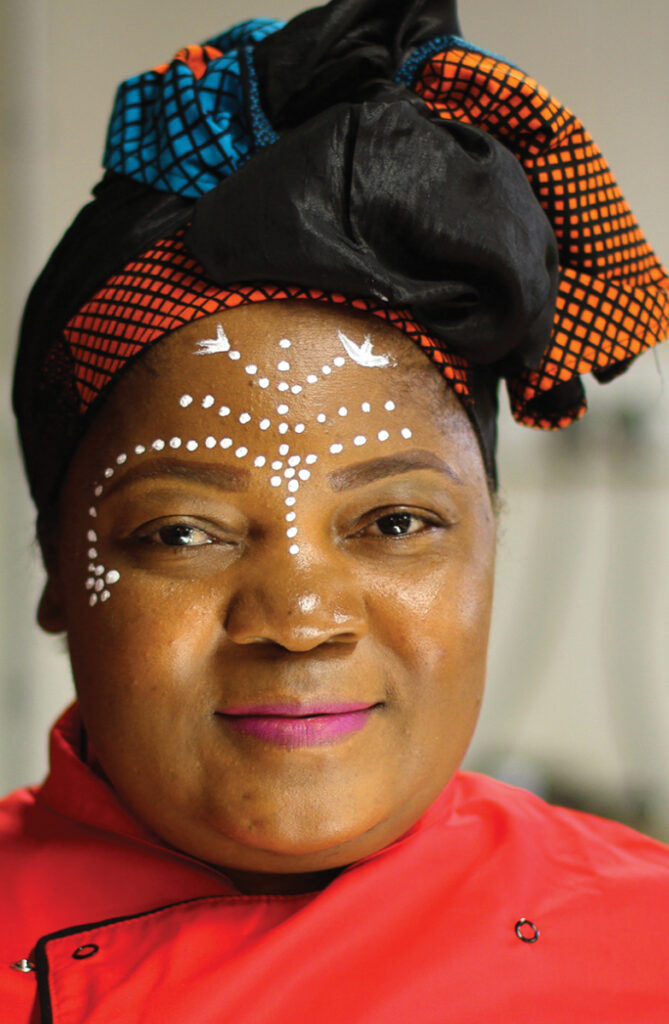 Visiting Cameroon, situated in West Africa, is like visiting many African countries in one. For starters, while English and French are the predominant languages depending on where you are, there are 230 other languages spoken in the country and multiple ethnicities. Travelling region to region, you’ll find vastly contrasting terrain with rain forests, desert plains, mountains, plateaus and beaches. The weather is equally diverse.

But one thing remains the same throughout: Cameroonians are famously hospitable. Even though life is a struggle for many, they will generously go out of their way to feed you something even when they have little for themselves.

From Bonaberi to GOLD Restaurant

Evelyn, who has worked at GOLD Restaurant for the last fourteen years, recalls growing up in Cameroon. She was born in 1983 in the port of Bonaberi on the western side of the harbour, across from the larger port of Douala, the commercial capital of Cameroon. The Littoral province in which Douala is situated is a rainforest region with a high humidity. Evelyn’s Cameroon is hot and sticky, even in winter.

Her mother is a subsistence farmer and a single parent of seven girls of which Evelyn is the fourth born. Evelyn’s father passed away when she was very young. Times were tough but there was always food in the house and plenty of love to go around.

It isn’t unusual for families to rely on growing their own food in Cameroon. Rainfall is generally plentiful and in many of the regions, including the Littoral province, growing conditions are good. Evelyn speaks of a vast range of crops in Cameroon. Whatever they grew, they ate and if there were surplus this would be taken to market to sell.

It is her childhood that fostered a love of Pilau rice – her favorite food. On the GOLD menu she can’t get enough of the tomato soup and has been instrumental in crafting our curated Spice Experience. In fact it is her love of spices, particularly roasted masala, that has her known as the spice queen here at GOLD.

To food market to market

Carrying their produce on their heads the family would walk to the market, usually barefoot because more often than not there wasn’t money for shoes. In spite of the long distance, roughly the same as Cape Town to Stellenbosch or approximately 50 kilometres, the journey was always exciting. In fact, the build up to market day was exciting because it meant money for fees to go to school. If payment wasn’t forthcoming, the school sent Evelyn and her sisters home.

Later on, Evelyn left school by choice to get a job as a hairdresser to help provide for her younger sisters. She takes little credit for the fact that she too has made personal sacrifices so that her sisters could have better educational opportunities. All of them have since graduated and she proudly shares the news that the youngest sister who lives with her in Cape Town has graduated with a Bachelor of Science in Chemistry.

In 2008, Evelyn had left Cameroon in search of brighter prospects in South Africa. She had little idea as to how she was going to make things happen for herself and how she was going to continue to help support her siblings. But she was determined. At the back of her mind she still had the notion, as she’s always had, that one day she would become a chef.

Arriving in Johannesburg, she was unable to speak a word of English and met a lady who put her in touch with Ma Bea (Beatrice who also hails from Cameroon). Ma Bea is one of the host managers at GOLD Restaurant in Cape Town with whom Evelyn subsequently stayed for the duration of her first four years of employment there.

Her first job at GOLD Restaurant was as a dishwasher. She says, “everything is a gift and an opportunity if you’re willing to learn, to work hard and show respect for yourself and others. My mother taught me that”.

Since starting at GOLD, Evelyn has studied to become a chef. She also studied English. Nowadays she spends much of her time preparing the delicious African food for which the restaurant is well known. While happy to be exactly where she is, Evelyn has no plans to slow down. In fact, she has since been promoted to one of our Head Chefs.

What she left behind in Cameroon

Evelyn is an intriguing young woman. She’s brave but non-confrontational, friendly and gentle. Yet, behind the charming girlish voice and twinkly smile there’s a sadness that has nothing to do with what she and her family had to overcome growing up.

Hospitality is about pleasing people

Most chefs will tell you that you cannot please everyone. Evelyn disagrees. She believes hospitality is about truly caring for your guests. While making all guests happy isn’t always easy, the GOLD kitchen team, sometimes as many as ten on a busy night, understand they are in the people-pleasing business.

At GOLD Restaurant, hospitality flows over from the dining areas into the kitchen. She says she will always try to make a plan to pair ingredients and create alternative African dishes (the menu always has alternative options) to keep diners at GOLD satisfied.

Home is where you are happiest

It didn’t go unnoticed that her mother made huge sacrifices and worked hard to ensure that there was always something for Evelyn and her sisters to eat, and where possible, education. Evelyn has done the same. Family is everything to her.

The longing she feels for her family is almost unbearable but she has a mother here too in restaurant owner, Cindy and a big sister in Ma B, both of whom listen, really listen and try to understand her heart. In her words, “My favourite thing about working at GOLD is that we are one big family.”