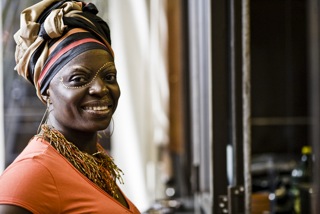 One of the biggest misconceptions about Africa is that the continent shares a homogenous culture. The reality is that within each of Africa’s 54 independent countries there are numerous ethnic groups with their own unique language and cultural beliefs. Even in the smaller African countries like Cameroon, the people, climate, terrain and foods are multifarious. As Beatrice Agho (Ma Bea), one of the host managers at GOLD Restaurant says, “you can cook a different traditional Cameroonian dish every day for months without exhausting your options”.

Why the nickname “Ma Bea”

Beatrice is tall and statuesque. Her voice is seductively husky. Her fluency in English and French a throwback to Cameroon’s past when it was repeatedly colonised by various European powers.

When asked about her nickname “Ma Bea” she says it’s because she likes cooking for people. Ask anyone else and they will tell you it is because she cares for people, particularly Cameroonians. She is constantly helping her countrymen to find work in the hospitality industry and to adjust to life in a new country. When she goes back home to her village in Cameroon, even the locals call her Ma Bea as a sign of respect. On every trip back home Ma Bea arrives with some or other thoughtful necessity for her community.

Growing up in Africa

Beatrice was born in 1978 in the Northwest region of Cameroon. Her father worked for the government in Lands and Surveys and the Agho family had a happy life in an upmarket government residential area in a town called Up Station.

From as far back as she can remember Beatrice and her siblings knew what was expected of them. Her father was, and still is, highly respected for his integrity and humility. He taught his children to be independent, appreciative and socially conscientous. They were not the pampered children of wealthy parents. Ma Bea remembers, sweeping and mopping floors before going to school, washing pots and preparing food. Everyone in the household had chores.

Her mother was a seamstress who employed designers and machinists. Ma Bea remembers her mother creating her own patterns and styles, carefully selected her fabrics and taking her popular beautifully styled and meticulously stitched garments to the lively bush markets in neighbouring villages to sell. She remembers learning to use the sewing machine when she was 10. Even then she was strong willed and focussed, hardly noticing when the sewing machine needle darted straight through her finger. To this day Beatrice wears vibrantly patterned African inspired dresses and headpieces, an expression of a fiercely independent and creative spirit.

Food is an integral part of who Beatrice is and it’s no accident that one of her favourite childhood dishes, coconut rice makes a popular return to the GOLD Restaurant menu from time to time. Ma Bea takes a serious interest in what comes out of the restaurant kitchen. She says, “It’s important to ensure that the food on the menu is a true reflection of the quality of African food that GOLD Restaurant is known for and it’s equally important to find a balance between authentic African food and what guests enjoy”.

As a little girl Ma Bea would prepare extra food for school meals not just for herself but also to share with her friends. In fact, to hear her talk about preparing traditional Cameroonian food “back home” is as fascinating as watching her walk through the restaurant dining area with a huge basket balanced on top of her poised head.

In Cameroon, children are brought up as part of a larger community. Collective responsibility regardless of social station is visible in practically every facet of Cameroonian life. Beatrice says, “your neighbour’s child is your child and sharing is part of you as a Cameroonian. It is a natural way of life”. Every day, Ma Bea would wake extra early to prepare and take beans and puff puff (a type of bread), corn chaff, rice and beans or stew to school with her. It wasn’t just for her friends but also for the less fortunate children from neighbouring villages who weren’t able to bring food of their own. To this day she enjoys “eating from the pot and sharing with friends” her roasted fish, ndole (spinach with nuts), plantain, pap and achu (made from pounded coco yams with gravy).

How to prepare a proper fire for cooking

Beatrice remembers rummaging through the forest near her house to collect wood in order to make fire to cook the food. As is customary in many Cameroonian homes, the Agho kitchen was behind the main house. Beatrice demonstrates with her hands as she explains how to properly prepare a fire for cooking. After all, technique impacts the end result. Three stones of equal size and height are strategically placed equal distances apart. A wood fire is prepared inside the stone layout. A cast iron pot is placed on top of the stones. Logs are fed into the fire to regulate heat throughout the cooking process.

Prior to cooking – before placing the pot on the fire – a poultice of cool dead ash from the previous cooking fire is mixed with a little water. This is rubbed around the underneath of the pot to create a barrier so that when the pot turns black during cooking it can be cleaned easily.

Refrigeration in the Agho household took the form of a practical and innovative use of a cooler box or cooler boxes and clever food storage practices. For instance cooked pap (a staple food in many parts of Africa made from maize in various consistencies) was portioned and carefully wrapped in banana leaves before being placed in the cooler box.

Ma Bea grew up happy, hardworking and determined. By the time she was 30, she was an accomplished hairdresser, cook and entrepreneurial businesswomen in the clothing and jewellery trade. In 2006 she had come to Pretoria in South Africa to live with her sister in law. By 2007 she had studied hospitality and was working at GOLD Restaurant in Cape Town. In the early days at GOLD Restaurant, with Cindy’s (Restaurant owner) blessing, Ma Bea ran a successful catering operation as a side business servicing the Cameroonian community in Cape Town.

She also plied her food trade among her fellow “kwerekwere” (foreign visitors to a township) in the buyam-sellam market alleyways at the Parow train station near Cape Town on weekends. Initially the makeshift market was a small hub of weekend activity with a clutch of stalls containing everything from food, clothes, CDs, fruits and veggies, shoes and other goods.

When her brothers died

Tragically, between 2007 and 2008 all three of Ma Bea’s brothers passed away back home in Cameroon. The events surrounding the loss are difficult for her to talk about even now. The loss was almost unbearable for Ma Bea, her parents and her four sisters. While she received love and support from colleagues and friends in Cape Town it was only when she went home to Cameroon to see her brothers’ graves for the first time that the healing process began.

In many traditional African cultures parents have different aspirations for and expectations of their male children. For instance when girls marry they become the responsibility of the husband’s family and forfeit the right to inherit from their biological parents. It is also customary even if you parents are affluent that male offspring send money home to their parents. This is a cultural gesture of respect and appreciation.

In the Agho household Ma Bea’s father was progressive by traditional Cameroonian cultural standards. He made it clear to all of his children that each of them would inherit equally regardless of gender. When her brothers died Ma Bea made the decision to take on the role of sending money home to her parents.

Prior to working at GOLD Restaurant, Ma Bea worked for another well-known restaurant that didn’t acknowledge her value. She says, “Cindy is different. She trusts me. I love and care for her and the restaurant. She always tells the truth no matter what”. She’s silent for a moment and then adds, “I don’t know what I love most about working here. I love everything about it. Cindy has faith in me. In fact, the only time I don’t think about work is when I go home”.

Ma Bea is a feeder and nurturer. She believes that good food should be a communal or shared experience. “It’s in my DNA” she shrugs. It comes from her community upbringing. Still, Ma Bea acknowledges that with her strong personality comes learning to manage emotions. She knows now that “if I fight with you I don’t need to put it in the heart. I always take things out of my chest. You grow more from listening than speaking”.

When you next book a dining experience at GOLD Restaurant be sure to look out for Ma Bea and spare a thought for the feisty little girl rising early to stoke the fire behind the house to prepare a meal for her friends.