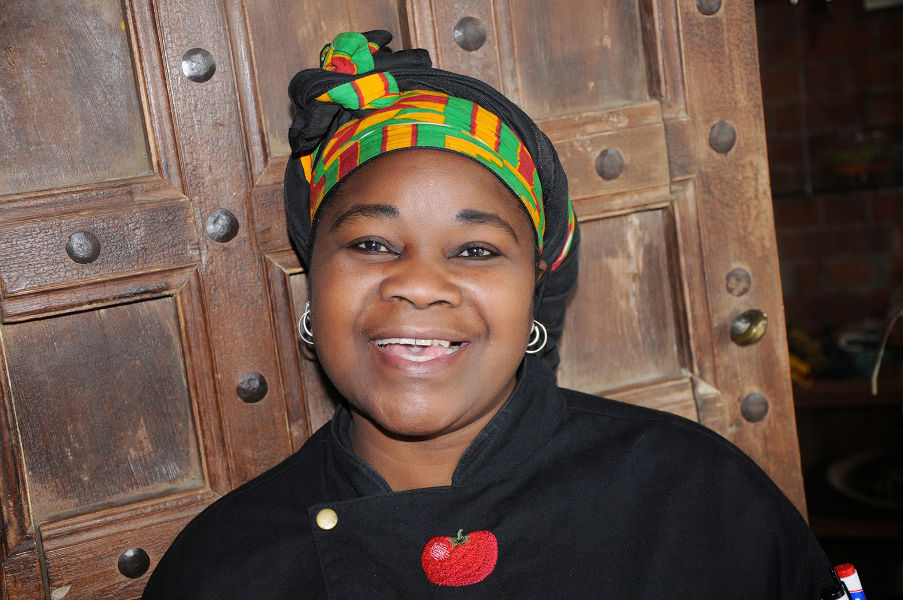 It isn’t uncommon to hear lively voices raised in Xhosa song and laughter wafting from the GOLD Restaurant kitchen. And leading that happy team here at GOLD is one incredible woman – the lovely Mavis. As our head chef, Mavis says there’s no secret to building a happy kitchen. African people come from a background of communal support and cooperation and, “at GOLD Restaurant you become part of a family”. She says that Cindy, the co-owner and another incredible woman at GOLD, is, “like a mother to me, I can tell her anything. Her and I are close friends”.

A journey to GOLD

However Mavis’ journey to GOLD wasn’t always an easy one. When she was a teenager, in her birthplace of Lusaka in Zambia, Mavis dreamed of getting married and having two children. In the mid-1980s she met, fell in love with and married a South African political exile. He was part of the ANC’s armed wing, uMkhonto weSizwe.

In 1990, when Nelson Mandela was released from prison, political exiles started flocking home with hopes for a better future. Mavis and her husband uprooted themselves and travelled to Port Elizabeth in the Eastern Cape to her husband’s family. It was her first time away from Lusaka.

Not knowing what to expect, she recalls that she was surprised first by the society that was ill equipped to deal with returnees. In Zambia, her husband had received financial support from the liberation movement. In Port Elizabeth, while his family was welcoming and friendly, her husband now had to seek work in a difficult economic climate.

Her new life was tough and prompted mixed emotions and confusion. She found administrative work on a bakery project, which provided employment for returned exiles and political prisoners, but her marriage was not to last.

In 1994, Mavis’ uncle died. She left Port Elizabeth to attend the funeral in Cape Town with the clothes in her suitcase and her two small children and never returned. Initially, she stayed in her deceased uncle’s house and relied on support from her cousins. Then she worked for Catholic Welfare Development, a long standing NGO where she supervised the purchase and handing out of food supplies and toiletries for destitute women and children.

By 2000, Mavis had taken courses in personal growth, computer literacy and cooking, but she was unemployed. She applied for a general kitchen assistant position at a local restaurant in 2000 and by 2001 was kitchen supervisor. For ten years Mavis worked hard. However, being in the restaurant kitchen at night meant that there was no one to take care of her growing children.

In 2012 she found a home at GOLD Restaurant working the day shift. She says, “It means a lot to work at GOLD. There is real concern, consideration and appreciation for your circumstances here.”

A love for food

Mavis loved to prepare food from an early age and her mother had a roster for cooking and cleaning. Dishes that she remembers fondly from her childhood include okra and pumpkin leaves with ground nuts, and stywe pap (a kind of stiff porridge made from ground maize). The latter is best cooked on an open fire – just one of the nifty tips Mavis regularly offers up. “Real African food is all about natural ingredients and what comes from the land”, she says. “Back home, food is not rich, it retains it’s own natural taste. When you smell the aromas from food cooking in another house you can still smell the main ingredients.”

This is part of why she loves cooking at GOLD. The flavours of the food are enhanced and not hidden by the herbs and spices, and all the food is freshly prepared. It tastes real, like Africa. Her favourite items on the menu are hearty dishes like the Springbok venison pot and the mango chicken.

There are three essential ingredients Mavis simply cannot do without. These are her paprika, coriander and loyalty, all of which she says can be found in the kitchen at GOLD.