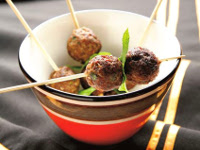 The word “kofta” comes from the Persian word for “mashed”. The main ingredient is ground or minced beef, lamb, chicken and even fish. Kofta in its various forms is a dish that travelled across the Mediterranean Ocean and is found in its various forms all over North Africa including Algeria. The country’s cuisine can trace its to numerous countries and cultures that visited, ruled or traded with Algeria. Algerian food is a combination of various influences such as Berber, Arabic, French, Jewish and more. Practically every cuisine in the world claims honours for the lofty meatball. A popular dish on our menu, this recipe is made from minced beef.