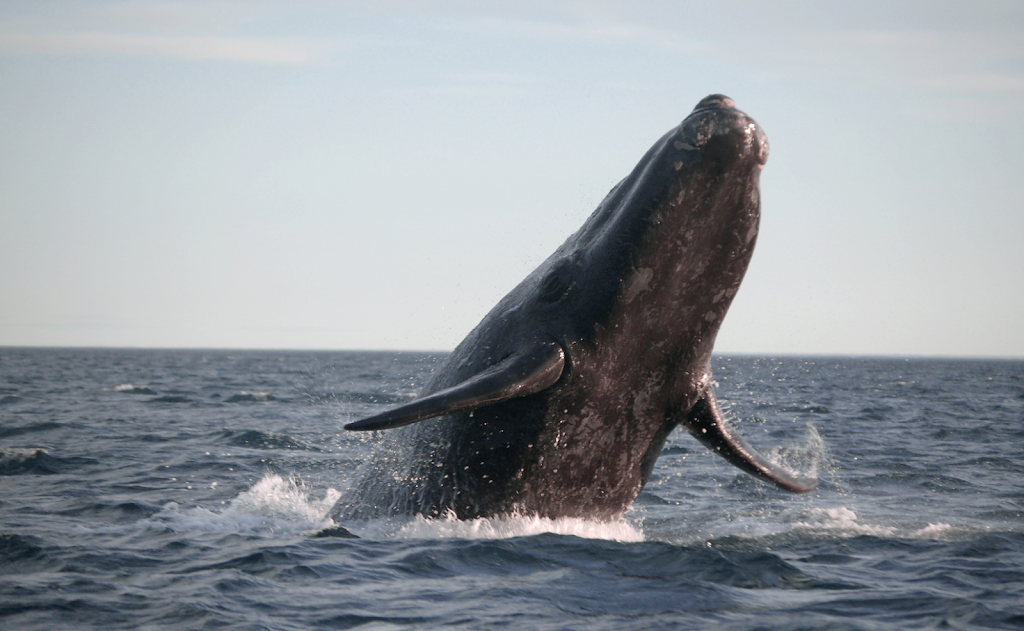 South Africa is widely recognised as one of the world’s best whale watching destinations. Each year these gargantuan sea mammals migrate from Antarctica to warmer climates and can be spotted at various points along the coastal belt of southern Africa. The most prolific sightings take place in Cape Town between June and November each year.

Like its two northern cousins, the southern right whale has noticeable callosities (hard skin patches with a consistency similar to human nails) on its head. It also has a particularly broad back, no dorsal fin, and an elongated arching mouth that begins above the eye. Its skin is a very dark charcoal grey or black, with some white patches on its underbelly. Two leviathan nostrils or blowholes, account for the v-shaped blow observed by delighted whale watchers.

With an average length of 15 metres and a scale-smashing weight of up to 60 tons, the popular and powerful sea acrobatics of southern right whales are impressive. This, and the fact that they come teasingly close to shore blowing, breaching, fluking, lobtailing, spyhopping and generally frolicking about the place has appropriately earned them a reputation as born entertainers and show-stealers.

Blowing refers to the air expelled through the blowhole at the top of the whale’s head, characteristically seen as a fountain of spray.

Breaching is the term used to describe a whale lunging out of the water in an arching back flip. It makes a loud slapping noise when it falls back on its side or back.

Fluking is the action that occurs when a whale raises its tail as it begins a dive.

Lobtailing is an activity in which the whale lifts its flukes and tail out of the water and slaps the water. Flukes are the boneless fin-like structures at the end of the tail.

Spyhopping occurs when a whale lifts its head, and sometimes its body as far as its tail, vertically out of the water. Sometimes it twirls around to find out what is happening above water.

The Cape Peninsula’s bays provide the ideal sheltered territory for whales to spend their time cavorting, courting, and nursing their newborn calves. As such, southern right whales are sighted every year in the False Bay area, a 45-minute drive from Cape Town’s central business district.

Further south, Walkers Bay in Hermanus, in particular, provides some of the best land-based whale watching on the globe. With southern right whales coming close to shore it isn’t unusual to see them from a Hermanus cliff path walk or while sipping coffee at a local street café. Another popular whale-watching spot is the southernmost tip of Africa, in the Cape Agulhus region, where the two oceans famously meet.

One thought on “The ‘Right’ Whale to Watch in Cape Town”