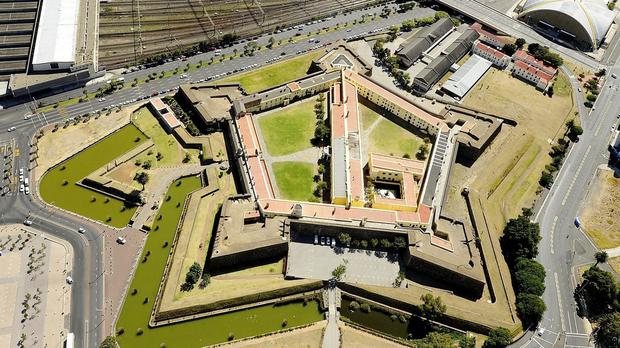 The best ghost stories hover somewhere between the real and the imagined. Steeped in history and situated beneath the brooding Table Mountain, close to stormy seas, the Castle of Good Hope in Cape Town lends itself to such stories. Construction of this star-shaped or pentagonal fort with a moat began in 1666 and was completed in 1679. This makes Cape Town’s castle the oldest and largest colonial building in South Africa.

Originally the castle was built as a replenishment station for ships sailing around the Cape of Good Hope. Soon it became the hub of civilian, social, administrative and military activity. It now provides an intriguing glimpse into early life at the Cape.

Attractions include the Castle Military Museum and the impressive William Fehr Collection. The latter provides important historical information about the people and landscapes of early colonial Cape Town. Visitors can take guided tours and witness the centuries old unlocking of the castle “key ceremony” followed by the firing of the Signal gun. See a replica of a real 17th / 18th century castle forge (blacksmith) or take a carriage ride.

The main gateway entrance built in 1682, through which the general public enters nowadays, is not the original entrance. The old entrance marked the original shoreline, which has since been reclaimed. Ferocious storms in the 17th century created waves that lashed up against the castle and pounded at its doors, hence the moving of the entrance was inevitable.

Many of the buildings within Cape Town’s castle walls are said to be haunted and for good reason. With such a long history come lighthearted and gruesome tales. These cling to the stony walls and, according to some, take on spectral forms and make eerie sounds in the quiet of the night. Even the night guards, by their own admission, have been known to take longer walking routes on their rounds rather than pass under certain archways and dark, dank spaces to get from one point to the next.

The ghosts of Cape Town

One such space is the Donker Gat (dark hole) – a windowless dungeon that also served as a torture chamber. Convicts, escaped slaves and “rebellious natives” would be held here. During winter floods, records show that the water rose up to three feet a minute and drowned some of the convicts chained to the dungeon walls. The castle also served as an execution site.

Sober individuals, those less prone to ball and chain rattling on the rooftop stories, claim sightings of a figure pacing between battlements, another leaping over the edge and sudden appearances of a black hound. People also report having heard footsteps on cobbled stones, murmurings, whisperings, screams and cursing even. Could any of these be the forlorn apparition of the lady shrouded in grey or the soldier who hung himself? What of the castle’s most beautiful apparition, one time resident Lady Anne Barnard, wife of the Cape’s first governor?

One of the most famous of the castle’s legendary ghosts is that of another governor, Pieter Gysbert van Noodt. According to one account (said to be first hand) several soldiers were unjustly condemned to death for desertion. They had originally been given a more lenient sentence, which he overturned.

While standing on the gallows, one of the condemned soldiers verbally sentenced the governor to divine justice. Shortly thereafter, Van Noodt was discovered dead in his chair. Apparently, he is the spectre accredited with the ghostly cursing and his so-called death chair is still in existence and can be viewed at the Koopmans-de Wet House Museum in Strand Street, without him in it of course.

Ghosts are said to linger in places where they die. For those interested in experiencing the eerie, The Cape of Good Hope Castle is a good place to start. It features on practically every Cape Town ghost list. Interestingly, restoration efforts now and again have revealed bricked up rooms with architects suggesting there may well be other rooms yet to be discovered and, who knows, perhaps other phantom friends of the castle too.

Whether you believe in ghosts are not, the Cape of Good Hope Castle is well worth a visit. It is rich in historical intrigue and still the seat of the South African military. Give yourself at least half a day to explore and have lunch at the De Goewerneur (The Governor) on site restaurant. Note that the gates close at 16:00. You don’t want to be left alone on the premises at night – just in case. It also gives you plenty of time to freshen up and prepare yourself for a delicious, fun and entertaining evening up the road at GOLD Restaurant. There’s nothing spooky about that.

How to arrange a visit