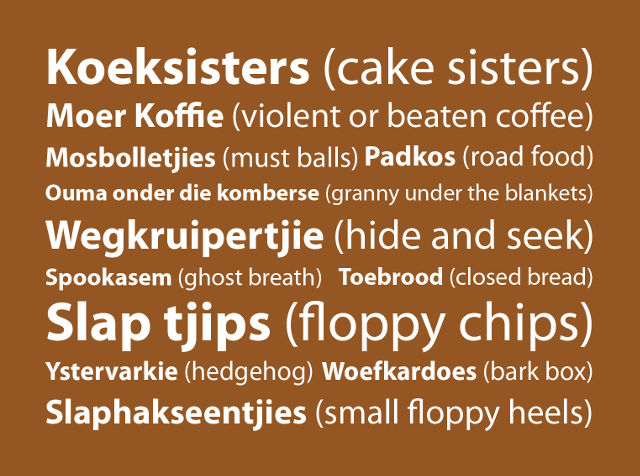 The Afrikaans language is expressive, rich and unique to South Africa and its food words are as intriguing as the items they describe. When directly translated into English this hearty African food lingo includes everything from violent coffee, cake sisters, floppy chips, small floppy heels and granny under the blankets to must balls, ghost breath, porcupine cakes, hide and seeks, bark boxes and road food.

Koeksisters are deep-fried sticky dough braids with a syrupy centre or dough parcels deep-fried and rolled in desiccated coconut.

In Afrikaans slang to moer someone means to hit or beat them. However, this ultra-strong, dark brew probably derives from the Middle Dutch moer, which means “layer of sediment”. Moer koffie is traditionally made with coffee grounds brewed (not boiled) in an enamel or aluminium pot on a stove or over an open fire – nothing violent about it.

Similar to brioche, these delicious buns are made with grape must. The dough balls are packed shoulder to shoulder in a greased loaf tin so that they rise up as opposed to out.

Padkos refers to food taken along on a journey usually a road trip.

This food word comes from the Dutch “slap hakke” which means without energy or weak. That said, there’s nothing lack lustre about this time-honoured South African salad recipe, which consists of small pickled onions in a tangy sauce.

In South Africa chips refer to both potato crisps and fries. Slap tjips are thick fries fried twice. After the second fry they are wrapped in paper to trap the steam, which creates soft and sloppy (slap) chips (tjips).

Toebrood is the Afrikaans word for the humble sandwich.

Containing no actual hedgehog ingredients, ystervarkies are small cubes of cake dipped in chocolate and then rolled in coconut. The latter could be said to resemble a hedgehog’s prickly spines. Ystervarkies are similar to lamingtons in all but size. South African lamingtons are smaller than their Australian cousins.

These are rolls of puff pastry with dates and almonds ‘hidden’ inside.

A woefkardoes is the Afrikaans word for “doggie bag” or carry-home food left over from food eaten at a restaurant.

Originating from the early Cape Dutch settlers, Afrikaans developed into an independent language influenced by English, French, German, Khoisan, Malay, Portuguese and other languages. Perhaps unfairly branded a ‘kitchen language’ from the mid-eighteenth- to the mid-20th century, there is some irony in the label. As a food language, for all its seemingly harsh sounds, Afrikaans is undeniably and deliciously vivid.

On your next visit, when you encounter the food words listed above you will be better positioned to fit in like a local and immerse yourself in South Africa’s brightly hued food culture. More importantly, you will have a clearer idea of what you are eating.